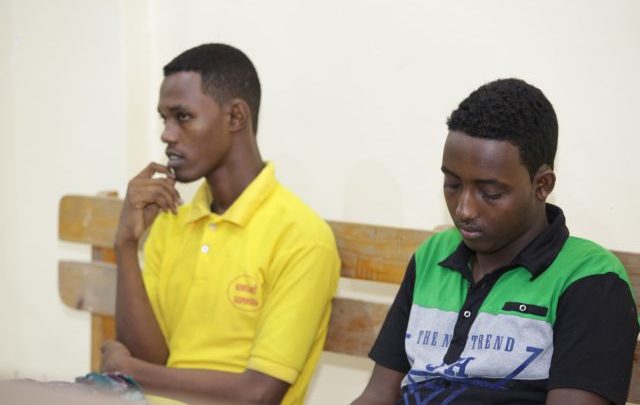 5 August 2019: Mogadishu Military Court had executed 2 members of Al-Shabaab terrorist group responsible for separate attacks in Mogadishu which left many dead. Anshur Osman Abukar Omar, 23 (in green), and Mohamed Ali Borrow Adan, 25 (in yellow), were accused of beings members of the armed groups responsible for the Sahafi Hotel attack which led to the deaths of at least 32 innocent people, including Anab Abdullahi Hashi who was secretary-general of the National Women’s Association in Mogadishu. The two were also indicted for organizing the two explosions at the National Theatre and near Daljirka Square that killed 27 people. Military court chairman Col. Hassan Noor Shute said the court found the two guilty of various charges and handed over the death sentences by law on 20/03/2019.

The place of the execution was presided over by Somali military court officials, and other government officials. Security around and within the execution site was tightened as all roads leading to the location were barricaded. The men “were executed by firing squad on Monday morning,” Chairman of the Somali military court Hassan Ali Nur told reporters.

Despite their tactical withdrawal from Mogadishu in 2011, the group still controls a swath of rural areas in the south and central Somalia as they carry out bomb attacks in towns controlled by the Somali government.