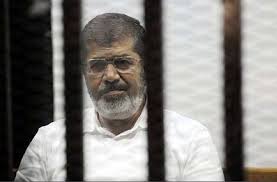 Egypt’s first democratically elected president Mohamed Morsi, an Islamist who was ousted after one year of divisive rule, died after falling ill during a court hearing on 17 June 2019, the attorney general said. He was 67.
Morsi, also the country’s first civilian president, had been “animated” during a hearing in the retrial of an espionage case in which he was accused of collaborating with adverse foreign powers and militant groups, judicial and security sources said.
“The court granted him his request to speak for five minutes… He fell to the ground in the cage… and was transported immediately to the hospital. A medical report found… no pulse or breathing,” said the attorney general’s office.
“He arrived at the hospital dead at 4:50 pm exactly and there were no new, visible injuries found on the body.”
Since Morsi’s overthrow on 3 July 2013, his former defence minister now President Abdel Fattah al-Sisi has waged an ongoing crackdown, targeting his supporters from the Muslim Brotherhood with thousands jailed and hundreds facing death sentences.
Morsi spent just one turbulent year in office after the 2011 uprising. He was toppled in a military overthrow after millions took to the streets demanding his resignation.
The Islamist leader has been in prison since his ouster on trial for several cases including for spying for Iran, Qatar and militant groups such as Hamas in the Gaza Strip.
Morsi was also accused of plotting terror acts.
He was sentenced to death in May 2015 for his role in jailbreaks during the uprising that ousted his predecessor, longtime autocrat Hosni Mubarak.
(Sources: AFP, 17/06/2019)